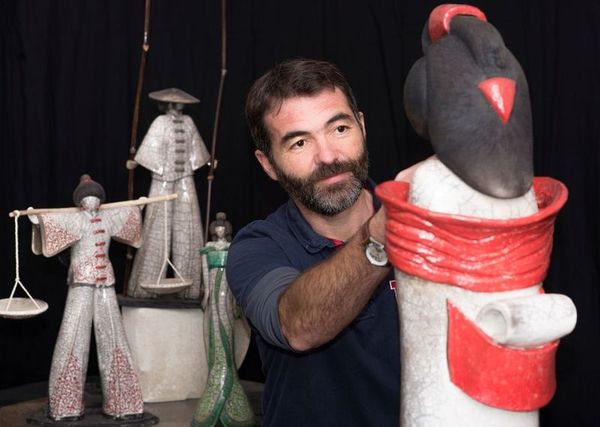 
ROMUALD DANIEL is a landlord-neither a lunar Pierrot, nor an educated in the arts. Self-taught, he is a terrier who is finely sensitive to the elements of nature, which he uses concretely to serve his technique and his inspiration – earth, water, fire, air.

The artist is a tender earthman: thus he deduces from his works, which know how to combine with grace the powerful material earth, modeled in large formats, and the delicacy of lines, the precision of the line.

His universe of predilection draws on his attraction for Asian culture, his art of purity, his serenity, his slowness, so much he feels close since the childhood rhythms, movements and forms of Asia.

The artist also excels in the animal world. Here again, he knows how to crunch, always in large sizes, elephants, hippos, gorillas, rhinoceros, etc. Their particularity remains the tenderness that emanates from the expressiveness of the characters linked to a research on color and allied to the technique of Raku.

The Raku is present in all the work of Romuald DANIEL, it is a technique of which he is master, daring all the experiments on formats defying all natural laws of fire. It is there that it also happens to play with the air, to produce certain effects on the cracks so characteristic of Raku cooking.

The essence of Romuald DANIEL is revealed here, for the artist is like many, inseparable from his work: geishas are passers-by who allow him to share his sensitivity and his universe with his audience. Thus, the details of his career as an artist and the renown of his sculptures will not be given here, as the artist considers them as accessory: the essential is for him to exchange around his work, with whom will come to meet her.

Cookies are important for the proper functioning of a site. To improve your experience, we use cookies to collect statistics in order to optimize the functionality of the site and adapt the content to your interests. Click on Accept and continue to accept cookies and continue directly on the site or click More information to view in detail the descriptions of the types of cookies and choose the ones you want to accept when you visit the site.

Please choose if this site may use functional and / or advertising cookies, as described below

These cookies are necessary to enable the basic functionality of this site to work.

These cookies allow us to analyze your use of the site to evaluate and improve our performance. They can also be used to provide a better customer experience on this site.

These cookies are used by advertising agencies to send ads that match your interests.